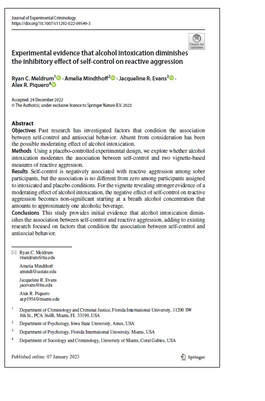 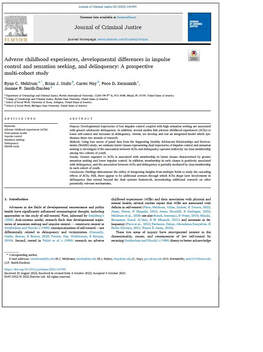 Purpose: Developmental trajectories of low impulse control coupled with high sensation seeking are associated
with greater adolescent delinquency. In addition, several studies link adverse childhood experiences (ACEs) to
lower self-control and increases in delinquency. Herein, we develop and test an integrated model which synthesizes these two strands of research. Methods: Using four waves of panel data from the Supporting Healthy Adolescent Relationships and Environments (SHARE) study, we estimate latent classes representing dual trajectories of impulse control and sensation seeking to investigate if the association between ACEs and delinquency operates indirectly via class membership among two cohorts of youth. Results: Greater exposure to ACEs is associated with membership in latent classes characterized by greater sensation seeking and lower impulse control. In addition, membership in such classes is positively associated with delinquency, and the association between ACEs and delinquency is partially mediated by class membership in each cohort of youth.
Conclusions: Findings demonstrate the utility of integrating insights from multiple fields to study the cascading
effects of ACEs. Still, there appear to be additional avenues through which ACEs shape later involvement in
delinquency that extend beyond the dual systems framework, necessitating additional research on other
potentially relevant mechanisms. 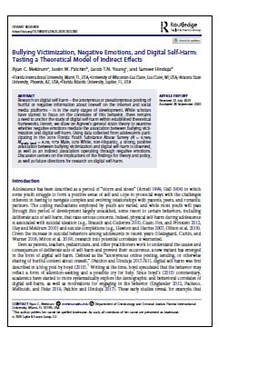 Abstract: Research on digital self-harm – the anonymous or pseudonymous posting of hurtful or negative information about oneself on the internet and social media platforms – is in the early stages of development. While scholars have started to focus on the correlates of this behavior, there remains a need to anchor the study of digital self-harm within established theoretical frameworks. Herein, we draw on Agnew’s general strain theory to examine whether negative emotions mediate the association between bullying victimization and digital self-harm. Using data collected from adolescents participating in the 2019 Florida Youth Substance Abuse Survey (N = 9,469; M grade level = 8.78; 47% Male; 32% White, non-Hispanic), a strong, positive association between bullying victimization and digital self-harm is observed, as well as an indirect association operating through negative emotions. Discussion centers on the implications of the findings for theory and policy, as well as future directions for research on digital self-harm. 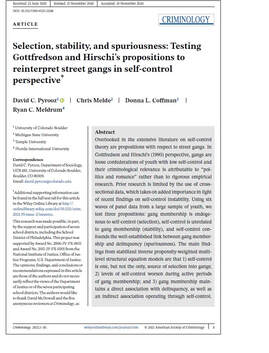 Abstract: Overlooked in the extensive literature on self‐control theory are propositions with respect to street gangs. In Gottfredson and Hirschi's (1990) perspective, gangs are loose confederations of youth with low self‐control and their criminological relevance is attributable to “politics and romance” rather than to rigorous empirical research. Prior research is limited by the use of cross‐sectional data, which takes on added importance in light of recent findings on self‐control instability. Using six waves of panel data from a large sample of youth, we test three propositions: gang membership is endogenous to self‐control (selection), self‐control is unrelated to gang membership (stability), and self‐control confounds the well‐established link between gang membership and delinquency (spuriousness). The main findings from stabilized inverse propensity‐weighted multilevel structural equation models are that 1) self‐control is one, but not the only, source of selection into gangs; 2) levels of self‐control worsen during active periods of gang membership; and 3) gang membership maintains a direct association with delinquency, as well as an indirect association operating through self‐control. The empirical evidence does not support reinterpreting gangs in self‐control perspective, instead pointing to the continued relevance of the group context to criminology. 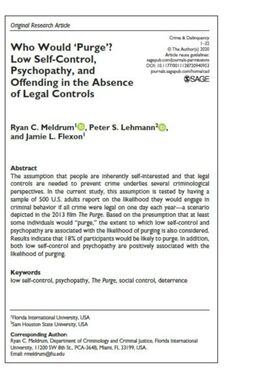 Abstract: The assumption that people are inherently self-interested and that legal controls are needed to prevent crime underlies several criminological perspectives. In the current study, this assumption is tested by having a sample of 500 U.S. adults report on the likelihood they would engage in criminal behavior if all crime were legal on one day each year—a scenario depicted in the 2013 film The Purge. Based on the presumption that at least some individuals would “purge,” the extent to which low self-control and psychopathy are associated with the likelihood of purging is also considered. Results indicate that 18% of participants would be likely to purge. In addition, both low self-control and psychopathy are positively associated with the likelihood of purging.

Abstract: A vast body of research demonstrates that the consequences of the “criminalization” of school discipline are not racially equitable, and Black and Hispanic students are more likely than White youth to experience exclusionary school punishments. However, limited prior work has examined the factors that might strengthen or weaken racial/ethnic inequalities in school discipline. Theoretically, academic achievement could moderate the effects of race and ethnicity, especially in conjunction with gender, though the expected direction of these interactive relationships is unclear. To explore these issues, the current study makes use of data from the 2018 Florida Youth Substance Abuse Survey (N = 54,611). The analyses reveal that, while Black male youth are the most likely to be suspended, racial/ethnic disparities are greater among females than males. Additionally, racial differences in the likelihood of suspension are more prominent at higher levels of academic achievement, particularly among female students.